Even while the anti-hunters and NPS are trying to remove the hunters from the Big Cypress National Preserve in SW Florida sportsmen and their families continue to show their conservation attitude.

A mere four days before May 26th we learned of a plan to clean up Loop Road. This is a road that leaves US 41 (Tamiami Trail) in Dade County, goes through a portion of Monroe County before it turns north through Collier County and back to US 41. It is a poorly paved road on the eastern portion and crushed rock on the western portion. The NPS has recently taken ownership of the Monroe section of the road because they said they could maintain it better than the County. However, the NPS has not been able to grade the entire length of their portion because they do not have the funds to do so.

With short notice and on a weekend, Memorial Day, when we would have rather been in the woods enjoying the Cypress or fishing for dolphin of the coast of Miami a good number of sportsmen and women decided they would attend this work outing and help the NPS clean up their road side. 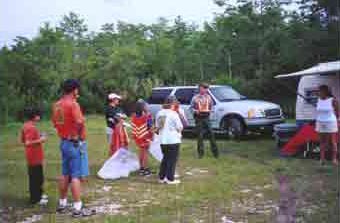 As expected we out numbered the none hunting participants about 16 to one. There were two members from the Florida Hiking Trail Association and they were the only none hunting members of the work group.

If you have never been to Loop Road it is a very pretty drive and most of the time a regular car can make the trip. You will see open prairies, pine ridges and deep cypress strands. As the road turns back north it goes through Roberts Lake Strand. This is a major natural watercourse that starts many miles to the north and eventually joins the Florida Bay.You are likely to see all types of wildlife as you travel this road.

Young and old alike pitched in for a morning of work. Ben Wolfe, 88-year-old Loop Road resident and Cody James Kimmel, are seen bring in another load of trash they collected along the side of the road. 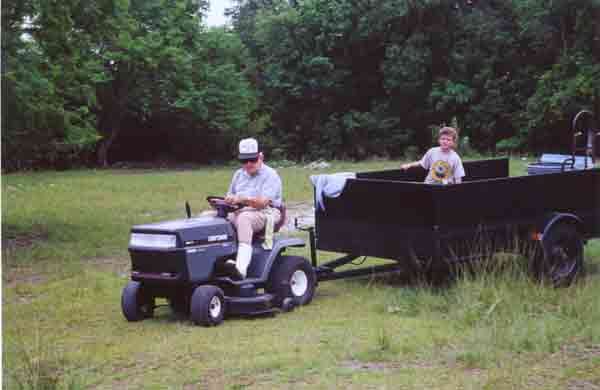 Many parents brought out their young conservationist to help take care of NPS trash. 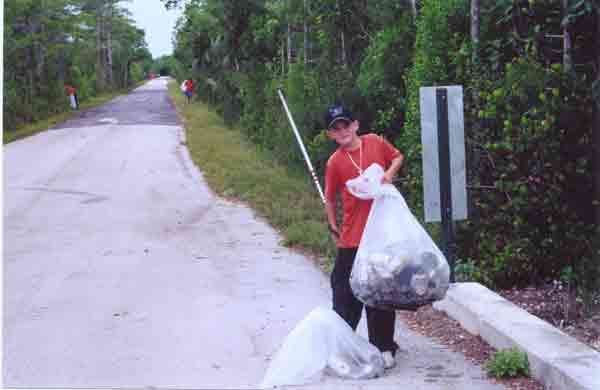 Ronald Booth with his "Bounty"

We met at 9:30 a.m. and had a short safety meeting with an NPS maintenance employee thanking all and reminded us of traffic and the possibility of snakes. He did not mention the alligators in the canal and there were plenty as the water was low. Florida is in the worst draught in 200 years and this is a part of the problem. Because the canal normally is a good place the fish and there are no trash cans where people fish and because many people are just plan thoughtless with their trash it seems every place one can get to the canal there was a lot of trash. Thus over the years of people acting improperly a lot of trash is in the canal and watercourses bottom and now visible. 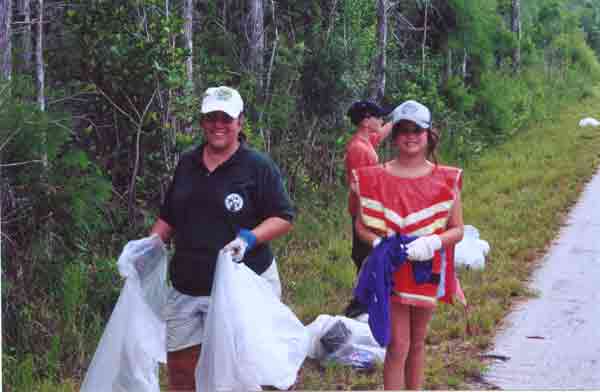 Thus the sportsmen in a mornings work collected enough trash to fill a stake side truck.The entire time we working for the NPS as volunteers we could not help but think while we are doing this the NPS and the anti-hunters are in the air conditioning figuring out how to get rid of us. To bad they do not care enough about the environment to come out and help clean up what visitors to the Preserve have discarded. It is not like these folks did not know of the activity because I learned of it on an environmental list serve that we know these groups are also on.

It is interesting that Superintendent Donahue paid each 'volunteers' from the student Conservation Corps to do the same type of work we are doing as true volunteers at no cost to the NPS or taxpayer!

Who really cares about the environment and the Big Cypress National Preserve? 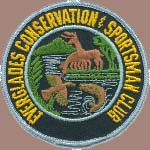